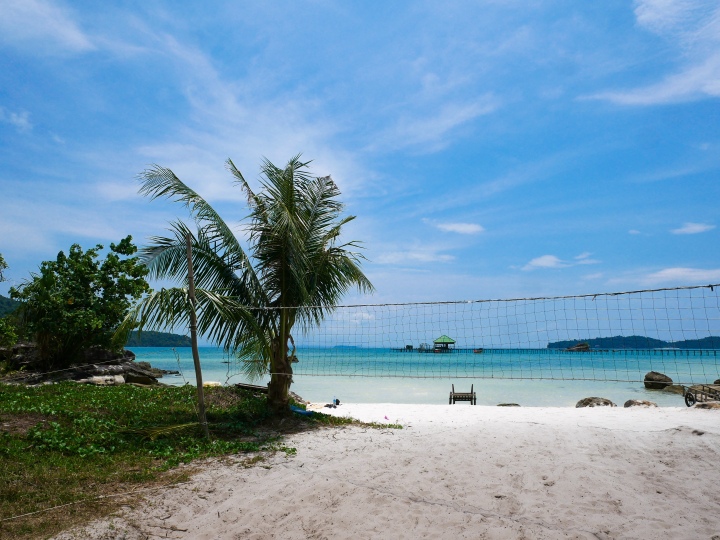 So I had gone to bed late and slept under two hours. I guess in those situations you just go on some sort of autopilot when you know you need to wake up the next morning, because I managed to make it to my boat. I was even so effectively packing that I was at the port a whole hour before departure. What a waste of sleep.

I had booked two nights at a hostel called Mad Monkey on Koh Rong Samloem after hearing about it from several other travelers. From the website, Mad Monkey looks like a party hostel chain that has several locations all over Southeast Asia. To get to the one on Samloem, you have to take the boat first to the main pier of the island, then their own boat to the hostel.

Arriving at the hostel felt like arriving to the summer camp in The Parents’ Trap. We came in as a group to the hangout area/restaurant/main building, dropped our bags and were given instructions by an employee that really made me think of a camp leader. All around there were others who had arrived earlier having breakfast on long, shared tables, chatting, playing games. And the more I saw of the place, the more I felt that this was a summer camp for adults: we were sleeping in bungalow dorms with individual names, the area was isolated from the rest of the island so there were really not any other people around, there was no WiFi to encourage human contact (wait, what’s that even??), purchases were made with a rechargeable bracelet which was super convenient, there was a volleyball net, a pier for jumping in the water or chilling at, hammocks and swings in the water, activities in the evening. It was a way more chill hostel than I thought, as everyone just spent their days laying around in the sun and eating, and the parties in the evening were not insanely crazy either, but just right. I loved that place, it felt like a calm piece of paradise with a bunch of cool people to spend time with with no hurry. 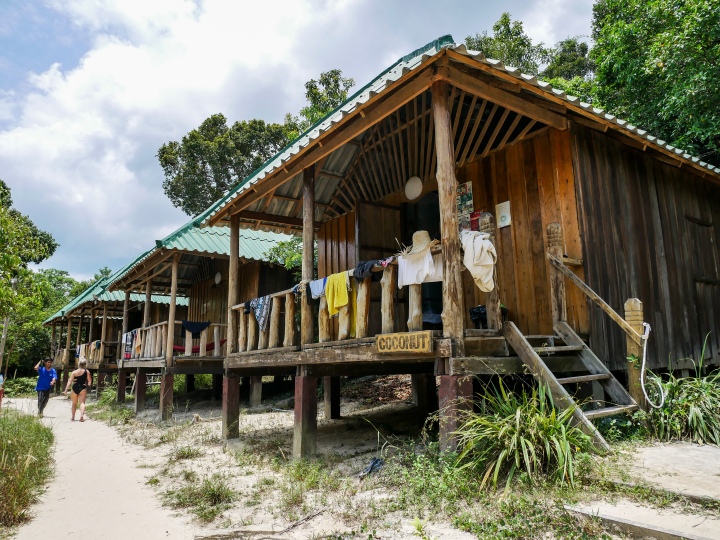 I spent my only full day at Mad Monkey like many others, just being lazy, reading, hanging in the hammocks in the sea, on the pier during the happy hour of the afternoon, playing cards, chatting with other people. It was so nice to not have a WiFi connection, as you could simply not worry about anything happening outside of that island. And as I realised when I got the connection back, nothing had even happened. I spend so much time thinking about what happens somewhere else because of the Internet, I need to be able to let go of that a little bit, even when I do have access to the Internet.

In the morning, I made my first real spontaneous move of this trip: I decided to skip the bus I had booked to go to Siem Reap that night and warn the hostel that I would be arriving one or two days later. Boom. Such radical, much wow.

I met two Belgian guys at Mad Monkey that I got along with really well, and they were going to a resort on Koh Ta Kiev that they were speaking of as if it was paradise. You simply don’t say no to paradise, right? So I trusted that there would be room for me and followed them there.

I had actually been waiting for this kind of occasion to tag along with some other travellers for a bit. Traveling alone is great because you make a lot of encounters and have the freedom to do whatever you want, but usually the connections you make end up being pretty superficial because everyone is constantly moving so you have time to barely meet when one is already going. So spending a few days with these guys was great and allowed to get to know some people a bit better.

But back to Koh Ta Kiev! I had not even heard of that island before, and maybe that’s good because thanks to the fact that it was way less crowded than the previous islands I had been to, it had a completely different vibe. There are very few people even permanently living on the island, and just a handful of hotels. We stayed at an eco resort called Kactus, where you can get by catching their boat at Otres Beach in Sihanoukville. Like Mad Monkey, Kactus was isolated from other places, but it was only a five-minute walk to cross the tiny bit of jungle to the next hostel that had a beach bar. If you wanted to go explore what is a bit like the main beach of the island you can hop on a boat at certain times or walk there around 20 minutes. The whole island is quite small compared to Koh Rong and Koh Rong Samloem.

Kactus was set up in an absolutely stunning setting. Everything was built of wood and bamboo, and both dorms and private bungalows were bamboo huts with no doors or locks. But that didn’t matter, because it is probably the safest place on earth. Both for you and your stuff, and for your mind, because the atmosphere could not be calmer and more relaxing. There was also the option to sleep in a hammock, which I find pretty cool.  Either way, as everything is open, you will fall asleep to the sound of the sea and the music from the bar. The restaurant was built right next to the sea, and you could sit on the terrace and watch the waves or the sunset while having one of their wonderful dishes. When it comes to food, Kactus has specific times for breakfast, lunch and dinner, as well as a daily changing menu, because they take their food very seriously and want to serve only the best. They also have wonderful desserts, fruit shakes, cocktails and more. On the beach, you can rent SUP-boards, surf boards or snorkeling masks.

There was a sign leading to the kitchen saying “Kactus family only”, and that’s exactly what the staff seemed to be, a family. They were so warm with each other, but also with customers. Everyone was treated individually, and from the beginning all members of staff would try to remember your name and always use it. It’s a small detail but it does a lot, and you kind of feel a bit part of the family as well.

If Mad Monkey was the perfect place to meet some fun-loving, 20-year-old backpackers, Kactus was a safe heaven for relaxing and taking time really off from life (of course no WiFi there either). It was a very healing place, with more hippie and alternative vibes, and a lot of travelers of all ages and backgrounds with visions of the world quite different from the generic Mad Monkey goer.

If there’s anything bad I need to find about Kactus, it is that since it’s isolated, you have no choice but to get food and drinks from their restaurant, which can be a bit expensive if you’re traveling on a budget. In addition, the place really is in the jungle, so you can’t be afraid of bugs. Like a scorpion crawling on the restaurant floor. Or two toads watching you sit on the toilet, a giant spider the size of your fist, a pile of thick centipede, a huge cockroach, a cricket and the usual ants showering with you. Yep, welcome to the jungle. But now I can at least say that not many insects back home will make me even raise a finger.

Funny that I mentioned Kactus and Koh Ta Kiev to be a healing place, because that night I woke up six times to throw up. One of the Belgian guys had caught some stomach bacteria a few days ago, and I must have gotten it from him, or just eaten something that didn’t suit me. Anyhow, that was not such a fun night, and I spent the next day mostly sleeping and resting my body. Still, I believe things go as they are meant to be: that piece of paradise was a pretty good place to rest, and because I had come there, I wasn’t on the night bus that night, which would have been pretty much hell. I had escaped getting my stomach upset so far, but I guess you have to catch something at least once on a longer trip. Maybe my immune system is now even stronger and can handle more than it used to? I have to say I’m not overly careful with what I eat, so I’m actually surprised that this hadn’t happened before, but maybe it means that I have developed at least some sort of resistance already. 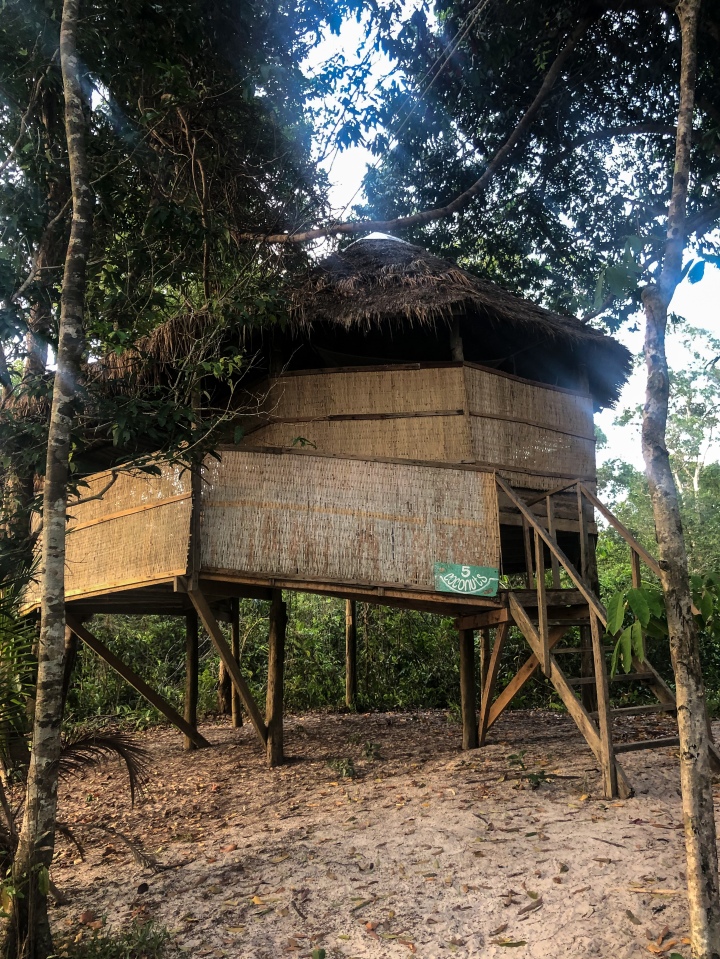 Time to leave the islands and the sea for a while. Back on mainland, I tried to find a new bus to Siem Reap for that night. Usually finding transportation, even on short notice, is super easy in Southeast Asia, but as Khmer new year was approaching, all the buses that the travel agency I went to worked with were fully booked for the next few days. Fortunately, I managed to book the last seat on a sleeper bus online.

The bus was leaving only at 8.30 pm, I had the day to chill at a beach bar and walk around Sihanoukville. During my walk, my assumptions and initial observations about this city were only strengthened. I have never had a feeling that there is some place that I just want to get away from as fast as possible, but Sihanoukville was one. It makes me so sad that this place that apparently used to still be a nice place ten years ago, has now come to this. I wonder about the locals as well. How many of them has had to move away from the way of those monstrous construction sites, how many have had to witness their hometown change in such a radical way? I would be devastated if that happened to Helsinki.

Finally, the bus left and Sihanoukville stayed behind. To my surprise, the beds on the sleeper bus were double beds, which means you share your bed with a stranger. Quite a strange concept that I had only heard of but never experienced myself. Fortunately, my bed buddy was a lovely fellow traveler, and the ride overall was way smoother than I expected it to be. Just to give you an idea of how different moving around in Southeast Asia can be from back home, the distance between Sihanoukville and Siem Reap is a 50 minutes flight, but by bus it takes a whole night, around 11 hours, because of the bad roads, and because there simply is no road linking these two major cities, so you have to go all the way back to Phnom Penh first. But it is what it is, and I slept like a baby on the bus, so I’m not complaining. 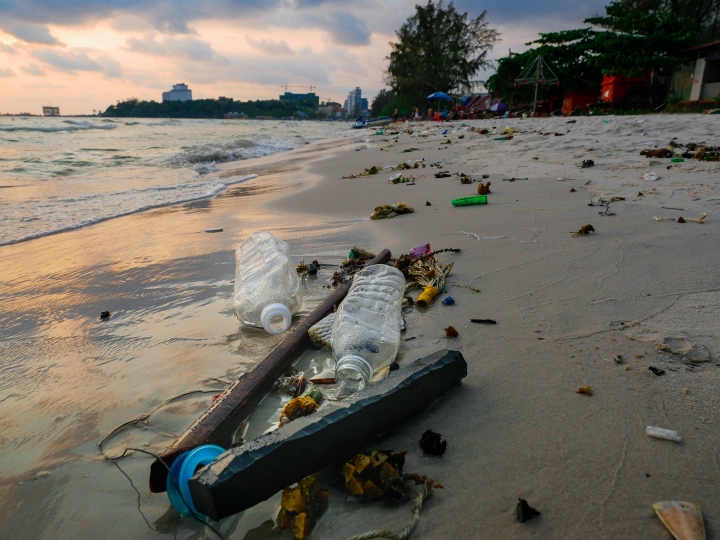