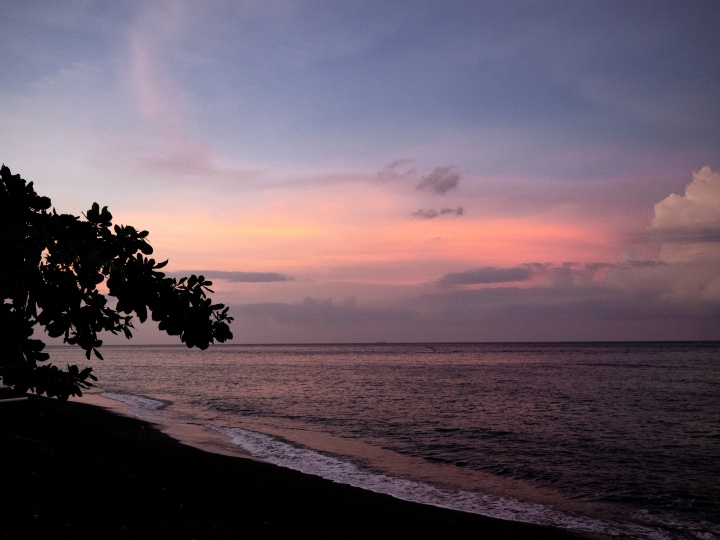 Some days you just feel exhausted. Not your body, but your mind. It was one of those days. I felt like talking with people or planning a trip was too much of an effort and that I needed time for myself instead. There was a Hindu celebration happening in town that the locals had been preparing for days, and I was supposed to go watch the festivities with some people, but I really didn’t have enough energy to join. You can’t have everything, and sometimes hitting pause is the best thing you can give yourself. So I grabbed my computer and a book and spent some time in a cafe writing and reading. I remembered it was also Easter back home, and who says Easter says chocolate. Unfortunately I couldn’t get my hands on any good chocolate, so I had a brownie instead. Nothing better on a low energy-day.

In the evening, I felt like a different person and I was ready to spend the night with the great people I had met the day before. We had dinner, and after that went to what is apparently the only bar in Ubud open after midnight. It was quite expensive, but actually a really nice bar. There was a live band playing until midnight and a DJ after that. Instead of a crazy rave, it was more of a chill bar or club. Ubud is not the place if you’re looking for a wild nightlife, but that bar fit Ubud’s relaxed and calm atmosphere.

Airbnb experiences is such a great way to find things to do when travelling that are a bit different from the tours that you can book at tourist info centres. I booked a coconut oil making workshop in a Balinese home, in a small town near Ubud. I won’t get into that more in depth as I already wrote a blogpost about it, but it was such a great experience. I got to learn about Balinese culture and traditions, see how coconut oil is made and spend some time with a local family. This kind of experience is definitely one of the things I will remember the best from this trip. It was great to get a bit out of the touristy zone of Ubud and see where and how people actually live in Bali.

I didn’t know what to think about Bali before coming, as I was afraid that it would be way too touristy and completely ruined by the rush of people that have been coming for holidays in bigger and bigger numbers in the last few years. When I came here, I was positively surprised of all the different sides there are to Bali. It’s quite a big island, and there is space for everything. There are super touristy spots where you couldn’t even tell which country you are in, there are chill, hippie surf and yoga spots, party spots, and so many other touristy places that all different travellers will for sure find their kind of holiday spot. But there are also so many villages and areas that have not been “invaded” by tourists, where life is very different from what it is in the parts most tourists usually see. I am so happy about that, because as a traveller I always wonder if tourism has had more of a negative effect on local life in places where it has become the main source of income. There are of course also many positive sides to tourism, but it’s so important that the negative effects are kept to a minimum and that tourism doesn’t grow in such a way that traditions are lost. In Bali, there seems to be space for both. 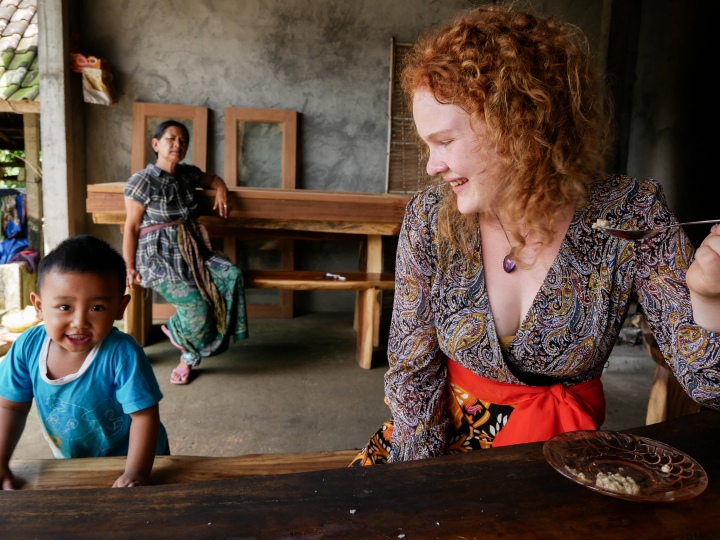 I continued my way to the north of the island to Amed. I picked Amed because I read that it’s a great spot for snorkelling and a bit less touristy than the south. When I arrived there, it really was way more quiet than what I had seen so far. Still, there were a lot of hotels and restaurants on the beach and along the main road, so I imagine that during high season it must be way busier. In the southern part of Bali you can’t really see that it’s low season as there are always tourists, but people living in Amed told me that it was very different there and the difference between high and low season was quite noticeable.

The beaches in Amed are very different from the ones I saw in Canggu, as they are not sandy, white beaches but made by black sand and stones. The sea is also way calmer, which makes it a good spot for snorkeling and diving but definitely not for surfing.

I sat for a good while in a restaurant at the beach, and from time to time, someone would walk up to me and try to sell me a miniature boat or bracelets. What I really didn’t like is that many of them were kids, most of them probably only around 10 years old or even younger. They asked my name, where I come from, and said that they were selling the bracelets – that they said they had made when obviously they were the same ones as in every tourist shop – to go to school. It seemed almost sweet at first, but when I realised how many of them there were and that they had just learnt those few sentences by heart, it gave me more and more mixed feelings. If they are selling bracelets at the beach during the day, it means that they are already not at school, and me buying a bracelet would probably not help it as they would only be encouraged to stay out of school. It’s so sad that this is happening, and I wonder what’s behind it and how it could be changed. But as sweet as the kids were, showing me the bracelets and repeating those few things they knew in English, I’m quite sure that buying one of the seashell bracelets wouldn’t help the situation. 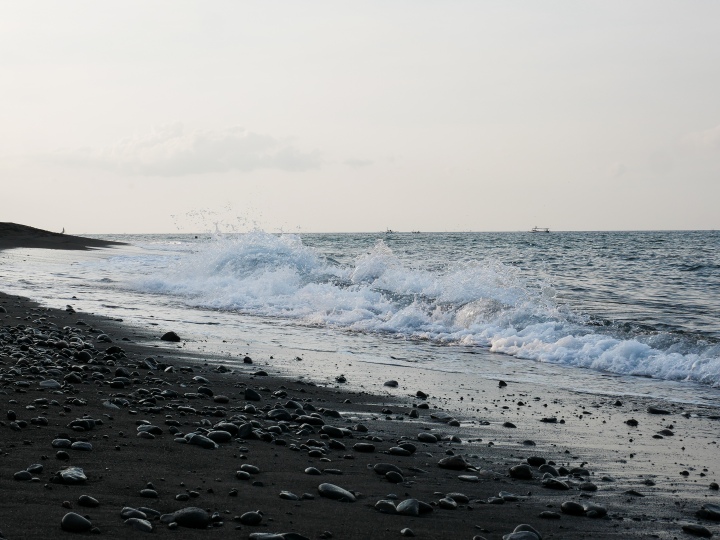 Only a few days before, I was having a discussion with someone and told them that I would probably never go scuba diving. And then I arrived to Amed and walked straight in a scuba diving centre and told them I wanted to do my first dive. Please explain me the logic in here.

But the deal was anyway that I went to the diving centre that morning for a first diving session, accompanied by an instructor and another first-timer. The other girl was really excited, which helped me also feel more comfortable. On the way there I only started realising what I had put myself into. Still, I felt surprisingly calm, apart from a few butterflies in my stomach. But things didn’t go as planned, and I got very anxious every time we dived and just needed to get back to the surface. All was good as long as I kept focusing on the fish and the corals, which were amazing, and sitting on the sand under the sea just felt surreal, but the second I started looking up and thinking too much, I started panicking and felling like I couldn’t breathe. I know it’s all in my head and that I just need to learn to trust and let go of the control. It’s easier said than done though, and that day I had to stop the session in the middle because I would have needed to be able to go at my own pace to get more comfortable. That’s okay, as I still got to look at the life underwater for a bit, experience what scuba diving feels like and also learnt something about myself. I will go diving again some day, but it will be with just the instructor and me, and next time I’ll be better prepared in my head. 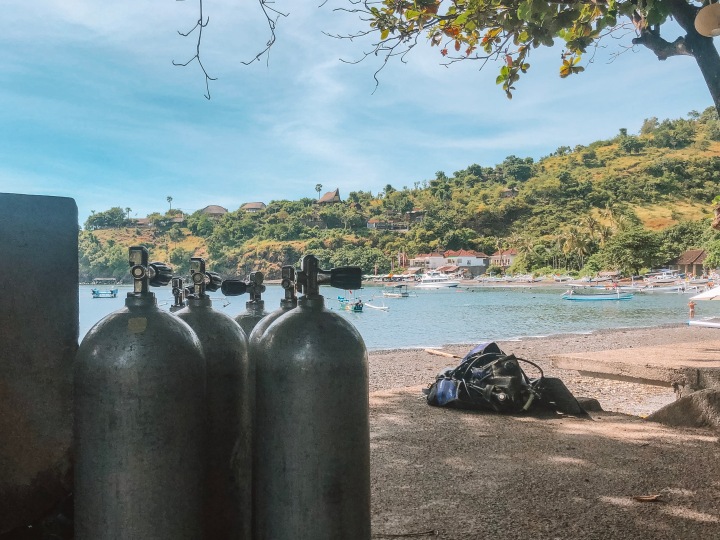 Next destination: the Gili islands. I had seen so many pictures on Instagram about paradise beaches and clear blue water from there, and I was a bit afraid that it would be a place completely built for tourists. I had heard that Gili Meno and Gili Air are quiet islands with nothing to do but relax at beaches or resorts, while Gili Trawangan is livelier. I figured Gili T would be better for a young solo traveler like me.

The boat ride from Amed was about one and a half hour, bumpy as usual, but you kind of get used to that. Arriving to Gili T, it was nice to see that there were no cars or motorbikes on the island, only bicycles and horse carriages. Such a nice change to busy streets full of motorbikes and no proper sidewalks. The harbour was in the middle of the most touristy area, which is basically one street on the seafront with restaurants and shops. Once you walk away from the beach, you find yourself really quickly on dirt roads surrounded by local houses as well as restaurants and stores that seem to be aimed more for those living there than for tourists. Even on that tiny island loved by visitors, there was a real local community that didn’t seem to be too disturbed by the business of the seafront. Opposite to Bali, which is mainly Hindu, Gili T is, like most of Indonesia, mainly Muslim. There were at least two mosques on the island, and the prayer calls five times a day could be heard all over the streets of the small town. That made me smile every time, as it brought up memories from other trips, to Istanbul and Eastern Europe. 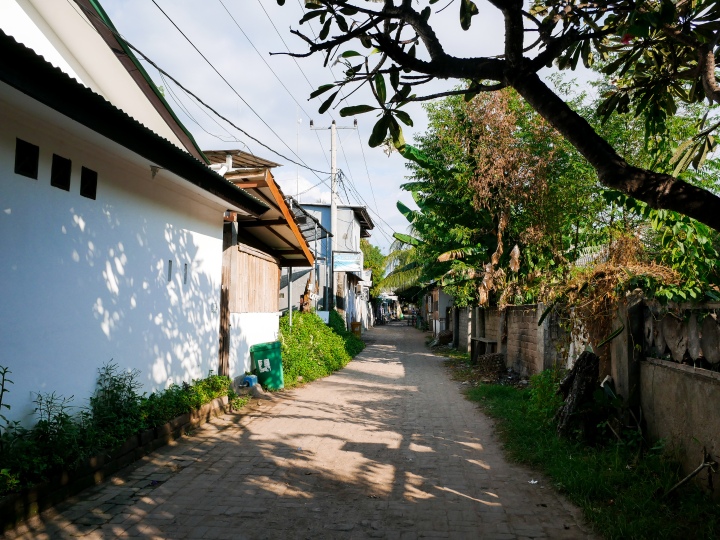