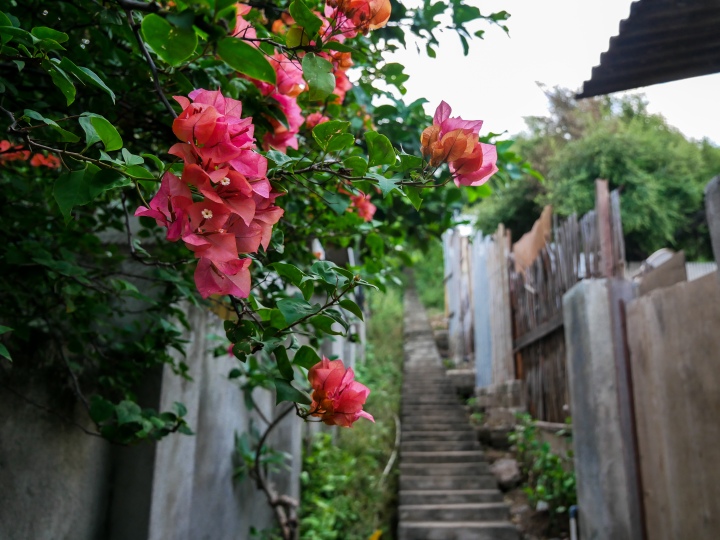 I had heard that the Gili islands are a great place for snorkelling, and especially if you want to see sea turtles. I booked the island-hopping snorkelling tour that my hostel offered. Our boat had a glass bottom, meaning a sort of glass window on part of the boat, which made me worry about its safety a bit at first, but it was actually fun because whenever the water wasn’t too deep, you could see what’s happening underneath. Apparently those boats are some thing there, I had never seen ads of that type of boats before but realised later that almost all boas for snorkelling tours around the Gili islands seemed to be in glass-bottom boats.

We had three different snorkelling spots around the islands. The first one was next to Gili Meno, and it was the spot with underwater sculptures. You can google it for pictures as I didn’t have a GoPro, but it’s a life-size sculpture of couples standing in a circle with other people lying at their feet. It’s quite strange, as I didn’t know about it and wasn’t expect to see that sort of thing underwater. The statues are beautiful, but at the same time there is a bit of a creepy vibe, as it makes you think that they represent drowned people. Apparently the artist made the sculpture with the vision that it will be soon covered in coral reef and thus become part of the marine space. The process has already started because the statues attracted a lot of fish around them.

The second spot was the turtle spot. Obviously, it wasn’t filled with dozens and dozens of turtles everywhere, but after a few minutes of swimming around, we found one, then another, and a few more later. At first I didn’t even notice them as their shell makes a great camouflage, but when I knew what to look for, it became easier. That was truly an experience I will remember. The thought of seeing such an animal that you have only ever seen in pictures or imagined, in the wild, at only a few meters from you, is magical. They are quite big animals, and the leopard-like pattern on their skin really drew my attention. In a way, this experience is comparable to what I felt seeing elephants for the first time at the sanctuary, but this time it was better, because they were really in the wild and doing what they wanted while we just observed them.

After lunch on Gili Air, we headed to the last snorkelling spot, which was maybe the dullest after the sculptures and turtles, but it was the one with the most fish.

In the evening, I went to the night market on the beachfront street. There was one restaurant with a buffet of all sorts of local dishes looking one better than the next, from which you could pick whatever you wanted for a very descent price, way lower than any “real” restaurant on the same street. Always go for the sketchy, not so hygienic place where there are locals. The ladies serving me were really sweet, and there was a group of older men sitting at the tables, singing some local songs, laughing a lot and dancing. It was a really fun experience to just sit there and watch them have fun, even if I couldn’t understand a word of what they said. Some things don’t even need explaining.

I started the day at the gym, where I discovered how much you can sweat from simply a jumping rope session, then walked around the island a bit. Whenever people try to say hello and talk to me on the street, I’m used to simply mumbling a “hi” but walking quite quickly past them, as they are trying to sell something and I don’t want to even get in the situation where they’ve managed to stop me and I have to get out of it without buying or being rude. So when walking on the backstreets of Gili, I naturally also did the same thing to people greeting me or asking how I’m doing. But at some point I realised that wait, those people can’t possibly be all trying to sell me something, because they are really just walking past me on the street, not standing in front of a store. They were actually greeting me, a stranger, just out of politeness, and instead of doing the same, I had escaped the situations by mumbling under my breath. In other words, I had been an ass to people who were so genuinely just greeting me because I wasn’t used to it. From that moment on, I obviously started smiling and greeting people in a much nicer way, but I also felt so much more relaxed myself. It’s sometimes exhausting to walk on streets with lots of salesmen trying to get you to buy and having to avoid them all the time. One more reason to travel to places with less of all the tourist fuss.

In the evening, I hiked to Bukit Trawangan, a hill on this small island from where you can watch the sunset. Or could, if the clouds didn’t hide it just that day. But at least the view was great anyway as you could see the bigger island of Lombok, and hike itself was already an experience. It wasn’t long, but it involved a lot of stairs, climbing over and crawling under fallen trees, crossing fields with cows and crawling through all sorts of bushes. It was interesting to say the least, even more so being alone. I started wondering how I would ever find my way back down after the sun would have set, but fortunately once I reached what would have been the viewpoint on a sunnier day, there were also some other people waiting for a miracle clearing of the sky (which never happened), and I got some company for the way down. Sometimes I wonder how everything always end up going so well, even when I find myself in the weirdest situations.

Day 43: From Gili T to Seminyak: a long way for a short distance

I don’t even know if that title makes any sense, but the point is that it was time to move again, and what I thought would be a quick boat and bus ride from Gili Trawangan to Seminyak back in Bali, ended up taking the whole day. But that’s how it is and I have learnt to not even get mad about it. The boat was late and hour, then the boat ride took a bit over two hours, after which finding the minibus and gathering everyone in it took another hour, and the bus ride including dropping off others on the way must have taken over two hours as well. But at least I got to listen to many podcast episodes and sleep a bit.

I arrived in the evening to Kima, a surf camp in Seminyak where I had decided to stay my final six nights to learn the basics of surfing before leaving. The place was amazing right from the start, and definitely next level compared to my usual hostels. I was greeted with a welcome drink, I slept in a dorm, but it was way fancier than most, the camp had two swimming pools and a jacuzzi and over all the place was really clean and looked super nice. There was a schedule for surf classes every morning and afternoon to which you could sign up according to your level, activities in the evenings and a lot of space to hang out with others.

What surprised me when arriving was that it definitely wouldn’t be about sleeping in like you would imagine a holiday. The first surf lessons start at 5.45, which means if you want to attend the morning sessions, you need to probably wake up around 5.30. As I had booked the beginner course, I didn’t even have a choice of what class to take, so 5.45 it was. The surf lesson was definitely a challenge, but it went better than I hoped and got me even more excited to go back the next day.

After the lesson, we had an amazing breakfast at the camp with other people in the beginner class. The breakfast was amazing, nothing to do with what you get at hostels. After two hours fighting the waves in the morning, there’s nothing better than fresh fruit, coffee, toasts and coconut rice, all in good company.

After breakfast, we had an extra surf session for beginners at the pool to better our technique. The teachers at the camp are so fun and nice, they spend their days hanging out with us at the camp until late at night even when they don’t have sessions to go to, and many of them came to watch our pool session as well. It gives a feeling of being a family, when the people working there also hang out with us on their free time.

As most people had woken up really early, the evenings at the camp are quite chill. Someone picks up a guitar, and the singing starts. Others will sit at the restaurant and chat over dinner, or just lie on the couches and relax. There are a lot of options if you want to party in the area around Seminyak, but I at least was already exhausted and ready for bed around 8 pm, so that’s what I did. The granny mode is on. 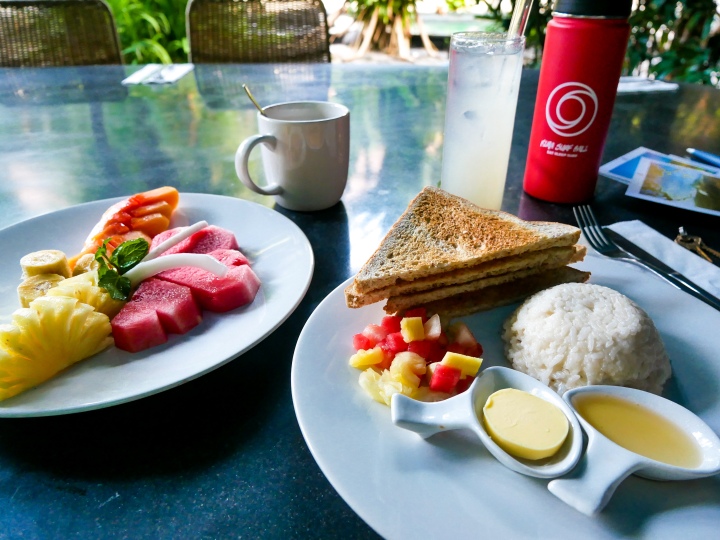 I met two really fun girls at the second surf lesson, who started the course a day after me, and we ended up hanging out together all day and the rest of the camp. In the afternoon we went for late lunch at a veggie restaurant, and in the evening we took a car to go to Canggu and watch the sunset. Unfortunately, the weather was too cloudy for a real sunset, but the intention was there anyway. Clearly, the weather hasn’t been with me lately with those sunsets.

We had dinner at the other Kima surf camp located in Canggu and tried to play pool but realised that it’s not possible in a weather where you are sweaty and sticky all the time. That caused many more than terrible shots which was at least a good reason for a laugh.

One thought on “Southeast Asia travel diary: Days 41 to 45”